The Tower, the Star, and “The Cycle:” a Poem and blog

Spiders are haunting me.  I keep seeing them wherever I look, but there aren’t any there.  They’re (almost) all in my head.

A few months ago, I went to chat with my husband in his basement home office, and on the ceiling right above my head was a 4″ spider.  I haven’t shaken the fear since, that there might be other goliath bird-eaters roaming the walls and dark corners of my house — and soul.

I can’t tell you why or when my arachnophobia developed, but I know I was young.  I don’t know if it’s a learned behavior, or a truly intrinsic fear.  Small spiders and Daddy Long Legs don’t bother me.  But wolf spiders, or any fat-bodied, furry, or substantial, bitey-stabby-looking ones (you know, the kind that make a disgusting crunch-squelch noise when forcibly destroyed)… if I encounter one of those close-up, it unnerves me to my core.

Spiders are unnerving like bad memories, old injuries, or aspects of ourselves we are terrified to face.  They lurk, ever-present but usually out of sight… until they’re not.

I’ve been thinking so much about spiders I decided to try to create a web with fluid acrylic paints.  A link to the how-to video is at the end of this post!

A few summers back, during one of my darkest ‘dark nights of the soul,’ a large number of funnel spiders settled into the cedar planks that side our forest home.  Being only less-than-quarter sized, I found myself cautiously observing them from a respectable distance.  Their webs are dense, opaque funnels, and whenever one got damaged, it was rebuilt in less than a day.  I became rather fascinated by them; they were so unaffected by the losses.

Days ago I found this poem “The Cycle” again, though I must admit I was searching for it.  As I look back at that time, I think of the Tower card, number 16 in the Major Arcana of the Tarot.  The Tower represents sudden change and upheaval; the crumbling of anything built upon an unstable foundation; destruction of false beliefs or perceptions; and ultimately, the need to reevaluate and rebuild on solid footings.

I think of Arachne, the mortal woman who wove tapestries more perfect and beautiful than those of the Goddess Athena.  She dared challenge the Gods, and her punishment was to be beaten.  After Arachne hung herself from shame, just prior to her final breath, Athena transformed her into a spider, that she might eternally hang, and weave, and know her place as a lesser-than – a merciless and chilling fate.

I think of Frodo, tricked by Gollum to walk blindly into Shelob’s lair (as told in the movie).  I don’t think I can conjure up anything more terrifying than that moment, as Frodo stands in the cold blackness, betrayed and alone, friendless and vulnerable, realizing a horrific death is the price for his errors in judgement.

Back in this dark period, mid-2017 or so, I was writing a lot of poetry like “The Cycle.”  I wrote daily, and I would publish it on a now-defunct website I made.  I attracted some attention; much of it good, but some so bad that… well, out of self-preservation, I had to quit.  A very jealous and wicked woman read wildly into what I wrote, somehow made it about her, then threatened to “destroy” me (yes, I have written proof, I am not exaggerating).  She did everything in her power and recruited others to ruin my reputation, my name, my band, and sever my most treasured friendship.  And for awhile, people bought it.  For awhile, she got her way.  As the smoke and mirrors cleared, I regained my good standing, but found I had lost many “friends.”  In reality, I had lost acquaintances who seemed to take pleasure in my defeat.  I lost acquaintances that were so easily swayed by gossip that it took precedence over their actual positive experiences with me.  Talk about unstable foundations!

In the last bleak moment before he would be devoured, Frodo remembered he possessed the Light of Eärendil, the most beloved star, and brought it forth to fend off the monstrous spider.  How beautiful is it that The Star, the seventeenth card in the Major Arcana, directly follows The Tower?  The Star is representative of renewed hope and faith.  It is an invitation to look toward the light and follow it out of the darkness.  Like Frodo, I found my Star and followed it.

I fear the spider.
Its sharp, spindly legs unnerve me to the core
The way it crouches, drawn back, prepared to launch
And stick those wicked needles into my vulnerable skin
And stab me with ravenous fangs
Hungrily stealing what has only ever been mine.

I heed the spider.
Its intricate web, woven from sheer instinct
The way it will rebuild after a strong rain or a strong wind
And crouch in a newly-spun funnel, waiting for prey
And once ensnared, entombing in silk
Hungrily drawing the fluids from the forlorn flesh.

That is its nature: it does not worry or regress
The spider spins a web and it eats, and rests,
The web is destroyed and the spider spins again.
And perhaps that is what scares me most —
Unlike the spider, I do not know how to rebuild
When everything is broken.

I learned more about myself in that year than I ever have.  I took the opportunity to meet, explore and integrate my shadow.  I had a lot of time to think and evaluate and align myself with what is true for me, what I want, and who I really am.  I pulled myself out of ‘Shelob’s lair,’ a little banged up but whole.  After I cut my losses and abandoned that devastation for places fresh and unknown, the damndest thing happened – I found peace with myself.  Shortly after, my sorely-missed friend reached out to me, we patched things up, and he is solidly present in my life today.  I have a much smaller social circle now but I trust everyone in it and know they are rooting for me to succeed, not to fail.  I’m starting to write poetry and music again.  Most importantly, I know beyond a doubt that as long as I remain true to myself, I can always trust myself to find the light.

Like Arachne, my Tower phases have transformed me forever.  Watching those funnel spiders taught me to move on and rebuild when things fall apart.  And as certain as the night descends and the sun rises again, each day reinforces the lesson that the cycle will repeat.  The Wheel will turn, and there will be more Tower moments, but Stars will always appear to guide the way.

May that be a light to you in dark places when all other lights go out. 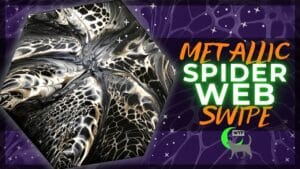 I got it in my head to paint a spider web with fluid acrylics.  It was way harder than I imagined it would be!  On the seventh attempt, I think I finally nailed it!  Click the button and check out the how-to video (and catch a hilarious story about the time a spider almost killed me in a Hawaiian hurricane!)